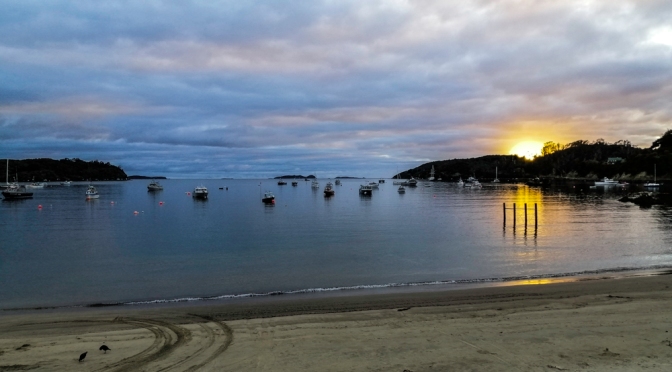 Stewart Island or Rakiura is NewZealand’s third island with about 85% as reserve land. Early Maori arrived here to hunt for Mutton birds. Settlers arrived and started with whaling and hunting fur seals. This was followed by the timber industry. The first settlement on the main island was at the Neck. The past can be witnessed today in varying state of decay. Besides tourism, which is on the rise, fishing for cod, crayfish, oysters and paua continued. Access to Stewart Island is via a 1 hour ferry from Bluff across the unpredictable Foveaux Strait or a 25 minutes flight from Invercargill. We came here with the intent to do the 3 days Rakiura Track but ended up staying for 7 days. There are lots to see and do especially if you like the wilderness and the isolation. This is literally “old New Zealand”.

Oban or Half Moon Bay is the hub of the island with restaurants, museums, transportation, accommodations and one store. Its only a short walk from the ferry jetty. However, its laid back attitude, remoteness and picturesque views are unforgettable.

From Oban go past Lonnekers Beach with a backdrop of matured Blue Gum trees. Walk along the road past Leask and Jensen Bays to road end. Then walk along the dirt track to historic Ackers Cottage on picturesque Harold Bay. Continue on through coastal bush past Fisherman’s Bay to Ackers Point Lighthouse. There are fantastic views of Foveaux Strait and scattered Muttonbird/Titi Islands – including Pukeokaoka, Herekopare and Ruapake islands can be seen. Titi or Muttonbird (sooty shearwater) can be spotted in late summer. At dusk, there are possibilities of seeing Blue Penguin returning to nest from feeding. Return to Oban the same way.

Just before Loneker Beach, go inland through dense bush across Peterson Hill. Birds including Kaka, Tui and Wood Pigeon can be heard and seen. The track leads to a sealed road and headed towards a golf course. We walked through the course and arrived at wild Ringaringa Beach. Strong wind blew across the crescent beach. Continued on past local residents homes to Wohler’s Monument. Just a short walk , we entered a private farmland with sheep grazing. There were panoramic views of Native Island and the surrounding islets. We back tracked to sheltered Deep Bay at low tide. A rusty fishing vessel laid on the silty shore. From here, you can continue towards Golden Bay. However, we retraced our track back to Peterson Hill and onward to Half Moon Bay/Oban.

From Oban, past the Four Square and immediately past the ferry terminal, go up onto Kamahi Rd. The views of the ferry terminal and Thompson Bay is stunning. We stopped at the 1904 wooden Presbyterian Church. Just a short walk is the delightful Church Hill Lodge and restaurant. The road continued into a secondary bush and onto Bathing Beach. Its crescent shape, sandy beach and gentle slope is quiet inviting. From here, we continued towards Mill Creek estuary near the sealed main road. Numerous foot prints were embedded on the muddy path along the creek. Was it Kiwi, Weka and just the common sea gull footprint? It is is a great place to explore at low tide. We followed the road back to Oban. This might be a good place to spot Kiwi at night.

Several roads lead to this iconic place. It beings with a steep uphill walk on the road before diverting into a bush. However, at the top, there were panoramic views of Paterson Inlet, surrounding mountains including Mt Rakehua, Ulva Island and a few islands. Kaka bird calls can be heard. Surprisingly, one landed on a nearby tree. Its’ colours were brilliant. It is a great place to watch sunset and if lucky, Aurora Australis! Perhaps a Kiwi later in the day.

We hired electric bike from a store just past  South Sea Hotel. Everything in Oban is a short hop and walk. With only 28 km of roads, it is easy and great way to explore the island. From Oban, we headed north past Mill Estuary onto Horseshoe Bay Road. We passed the botanical gardens and ended at Horseshoe Bay. The bay is quite spectacular and as the name suggested, it is shaped like a horse shoe. The weather was cloudy and chilly. We ventured along a walking track from Horseshoe Point Rd. The track skirted along the bay. Matured pine leaned towards the bay in defiance. On the shore below, rocks were covered with green algae. Giant yellow kelp boobed in the water’s edge. The track continued round the coast and ended at Braggs Bay. However, we retraced our steps back to Horseshoe Bay and headed towards a fishing jetty. We met a few fisherman preparing their boat and gear. They are fishing for cod. One young man replied that he’d be away for several days. These guys are hardy souls.

Another interesting place to visit is Lee’s Bay, just 3km away. We’ve been there at the start of our 3 days Rakiura Track.

We returned to Oban for a hot lunch and continued our cycling towards Thule Bay. The weather worsened and became much colder. One of the interesting sites around this road are the rustic sheds along the bays. They certainly add ‘colour’ to the isolated windswept landscape. Across the  rough bay, uninhabited Faith, Hope and Charity islands. Ryan Creek track begins from here skirting the bays with views if Via Vole Bay. The 2hr track joins the Rakiura Track at Fern Gully and onward to Oban.

This is a delightful short walk which I had taken several times. From the DoC centre, head west and turn left at Dundee Street. There is a sign post on the right. The walk is filled with fuchsia and several native trees. Bird songs can be heard all the time. I used this track to get to Traill Park.

This is a pristine predator free island with lush native forest, picturesque sandy beaches and coves, native birds including tui, kaka, kiwi, kereru, weka and saddleback. Occasionally, wildlife on the beach. It has high numbers of brown Kiwi (Southern Tokoeka). You might even see them at daytime. To make it even better, several walking tracks crisscross the small island. We took about 3 hrs wandering. However, on a tour, time is limited. The only way to get here is  a 10 minutes boat ride – regular water taxi from Golden Bay or on a tour. First port of call is at Post Office Bay. Look out for jellyfish and star fish. This is must do in Stewart Island.

Traill Park is an open field surrounded with matured bush. This a a great place to see wild kiwi birds. However, it is late, after 10 pm. I had been here from 10pm till 1am. No sightings. On the second day, around 1230, I managed to get a fleeting view of a single kiwi foraging at the fringe of the bush. Patience, silence and warm gear is essential. Apparently, these elusive birds do come out onto the field to forage. I was happy with my brief but satisfying encounter. Beware, it can get very cold here. Typical screeching kiwi calls can be heard around the bush. However. sightings can be difficult. An alternate is to join several outfits on a tour ($100). They literally guarantee sightings (at the airport or isolated beaches on a boat).

Stewart Island is the southern most Dark Sky Sanctuary with unimpeded views of the night sky. We gazed at Milky Way and distant stars everyday. The reason, there is literally no light pollution here. You don’t have to walk far either.

The possibility of witnessing the Southern Lights is here in Stewart Island. However, the lights depended on geomagnetic activities. I missed the one day in seven where it was on show (low level). You can always be hopeful and it would be a bonus. Good place is Observation Hill.

We came here after dinner to hopefully spot resident Blue Penguins returning after feeding all day at sea. Their nests are hidden on the cliffs near the jetty. We did not see any. However, I managed to see a shark swim just under the jetty. This is my first sighting of a wild shark. There are plenty in the water around Stewart Island. At daytime, it is a great place to observe hype of activities of disembarking passengers and goods. After a few days, we’re like locals giving directions and suggestions to the ‘green horns’.

The Kai Kart is a popular place to sample fresh and hot seafood and chips. It is one of the best I had tasted – prawns, squid, fish, oysters and more. It was served in a typical kiwi style, paper. However, please note the opening times and long queues are common.

This is a great place to get an insight into the history of the island, its pioneering people and native cultures including artefacts and photographs. The locals running it are very accommodating and friendly.

Across the Museum is this unassuming local theatre. We tried several times to get in but was closed. The suggested show then was ‘A Local’s Tail’ .

This is a great place for dinner, close to the theatre. It is a small kart but makes the best gourmet burgers and many other delicious choices. Like all eateries in Oban, be quick to get in.

The most centrally located and walking distance from the jetty. It has several types of accommodation, restaurant and the only pub in town. Great atmosphere and best place to rub shoulders with the locals. Check out the exterior ‘bus stop’. They are not waiting for a bus either! We stayed here. If you’re nice, they may even let you use their washing machine. Dinner bookings are essential. Try their fabulous cod dish. We enjoyed 2021 America’s Cup and St Patrick’s  Day at the pub.

Another moderately priced accommodation is Stewart Island Backpackers. A great place with private rooms and kitchen. Staples can be bought at the only outlet – Four Squares. There are few accommodations on the island and besides the two mentioned, can be pricey. Early booking is essential as the island is becoming a bucket’s list for Kiwis. Perhaps, consider travelling during the low season between May through October.

This is a walk into native forests, secluded sandy beaches and coves, historic milling sites and wildlife. Hopefully a wild kiwi! Read about my Hiking Rakiura Track and track photos. For the adventurous and well prepared, there is the tough 9 – 11 days North West Circuit and 4 – 6 days Southern Circuit.