I caught the shiny Red Bus double-decker at bustling cobble stoned Green Market Square. There are a couple of museums here in Cape Town and there was one that I did not want to miss, District Six museum. Here lies one of the many atrocities carried out during the apartheid regime. Poignant reminders fill the walls where over 60000 people; immigrants , colored and slave origin, were forcibly removed from this area to may way for white only area. Communities were broken up. On the ground floor is a map of the area. Some had left handwritten notes, artefacts of the by-gone era together with black and white pictures filled the walls. They all told a story. The regime had flattened their home but the resilience and spirit of the former residents was never diminished. It was an emotional and sombre walk around the building. Just to comprehend the Apartheid rule was difficult, let alone the human casualties left behind. I guess it is a place for reflection. There is a lovely cafe inside the building. A friendly smile and a hot cup of coffee did cheer me up. 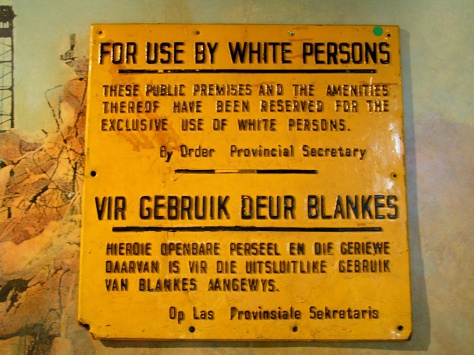 I walked to the possibly the oldest colonial building in Cape Town – the Castle of Good Hope. This fort was built by the Dutch East India Company in the 17th Century and was constructed in a pentagon shape. There were no guides available. I walked around the large grassy courtyard and around from one bastion to another.  The interiors were decorated with fine fittings, polished wooden tables, paintings and other extravagances of a colonial era. However, I found it lacking – plenty of space with little, information and signage about the various rooms and surroundings were lacking . Maybe I missed getting an info pack at the ticket counter. The fountain area was impressive and equally was the views of the Table Mountain. A great insight to the workings and opulence of the colonial masters. A walk with a guide would be enriching. The sun continued to shine brightly.

The sun was already setting as I jumped back on the Red Top Bus. It pulled out of the city and headed up towards Table Mountain. There was a magnificent view of the City Bowl, harbor  Devil’s Peak, Lion Head and Signal Hill. Table Mountain was quite impressive and looked formidable. The following day, I will be trekking to the top, weather permitting. The coastline and the deep blue Atlantic was impressive. Cape Town is well endowed with natural landscape and an enviable location. On the mountain, the cable cars were operating or perhaps closed for maintenance. 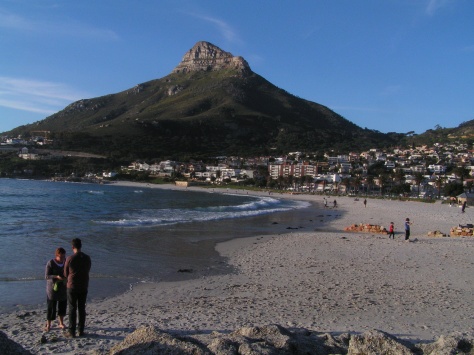 The last destination for me was to Champs Bay. A beautiful and effluent neighborhood with white sandy beach with boulders protruding on both ends of the beach. The backdrop is the imposing Twelve Apostles and Table Mountain. Cafes, petite retail outlets and bars lined the busy streets with both tourist and locals milling about. Seafood is popular here. The sky turned orange as the sun began to set. The tilting evening glow lit up the sandstone mountains that created amazing warm and picturesque views. On the beach, kids and families played. Joggers took advantage the late sun. The horizon was now bright red and orange as the sun descended towards the horizon. A cargo ship on the horizon headed towards the port. It was a magnetic sight as only silhouettes of people and dogs stood in admiration of the glowing star. From here the Red Bus followed the contour of the land along several beach neighbourhoods and returned to the Aquarium at V and A Waterfront. This is a great and convenient way to get to places or just to get oriented to Cape Town. There is another route that goes behind the Table Mountain, through the Botanical Gardens – the Blue Bus.