After leaving Orange River, the landscape became more arid. Grasses replaced the shrubs. The sun’s intensity increased. Sealed roads gave way to gravel. Surrounded by dust became a norm. A train track in the middle of a desolate landscape led towards the coastal town of Luderith, an old German township. Lonely telephone poles buried in red desert sand linked these remote areas to the outside world. I was excited to witness a small number of Oryx or Gemsbok, the national animal symbol of Namibia, roam in the unforgiving place. Tall hardy grasses replaced the sparse trees. Occasionally, a herd of nimble Springboks  wandered foraging on the meager grasses. After a long hot drive, we arrived at the camp site near Hobas, the first sight of habitation. We immediately departed towards the canyon viewpoints. The second largest canyon in the world was striking and impressive – the magnitude, the colours of the rocks and the deeply gauged out depth of the canyon. Emerald green pockets of water remained deep in the canyon floor. Hardy drought resistant grasses survived. The colours were vivid. The sun was setting rapidly and the canyon wall darkened in contrast. The golden grasses were illuminated and the mineral rock surfaces sparkled. From the viewpoint, it was a steep decent towards the canyon floor. The contours, the ruggedness, the remoteness add an aura of wilderness. Finally the orange sun set behind the canyon wall. The structural quiver trees stood upright in this uncompromising and rocky domain. A couple of Black-backed Jackal scavenged the arid rocky surface for their next meal. It was dark by the time we reached camp. The moon appeared on the opposite horizon against a darkened blue sky. It was chilly that night. 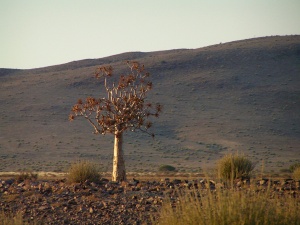