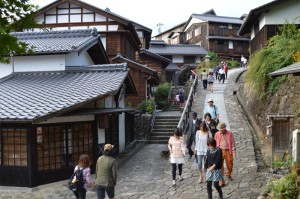 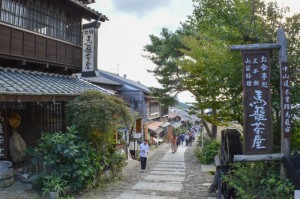 From Takayama , we headed back to Nagoya and caught an onward train to Nakatsugawa. Train journeys here in Japan is a delight. Food parcels from the train stations, ample leg room and hardly any noise from people. The sound of the iron wheels rolling over the rusty track is very soothing. From Nakatsugawa, we caught a local bus to a sleepy town of Magome. We now entered Kiso Valley, located in Nagano Prefecture and runs along the Central Alps. This is one of the few preserved towns, of the 69 so called ‘post-towns’, along the historic Nakasendo Highway. Before this highway was established, a shorter route was called Kisoji. Later, this network extended and was one of the five links between Edo (political capital) and then imperial capital Kyōto and was called Nakasendo [means – path through mountains] during the Shogunate period. They were mainly used by Samurais, merchants and feudal officials. The bus passed through golden rice fields weaving its way through the lush green mountains. 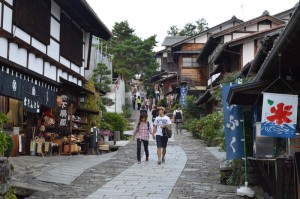 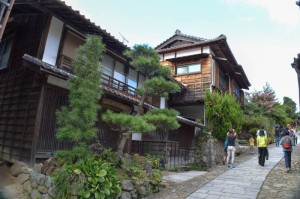 When we arrived in the late afternoon, the small town was not sleepy at all. In contrast, it was packed with people and came with all the attributes of a tourist town. Past the pedestrian’s only cobblestone pathway, the beauty of this preserved township emerged. Rustic wooden houses set on stone foundations lined on either side of a steep winding road, lattice doors and windows and surrounded by great mountains views. The entrance to this old post town is marked by a big water wheel. On a steep uphill walk, shops displayed all kind of gift items, aromatic food, local wooden handicrafts and more. It was refreshing to hear sound of gushing water beneath the paved street as water flowed through the channels. Green foliage and flowering plants accentuated the road side appeal together with sculptured pines.

Our stay tonight was in a “Chaya”, teahouse or inn. Our host greeted us and led us to our abode. Futon bedding on tatami- mat floors had already been laid out. An elderly woman in kimono gingerly walked around the corridor tidying up the place. There were great views of the mountains including Mt Ena and had an ambient old world charm atmosphere. The owners had a restaurant across the street.

A large water wheel spun rapidly turned by the gushing water. It certainly looks like a by- gone era village though touristy.

“The highway was very old, forged out of cobblestone, used by Samurai on horses” – Navindd

We strolled on the streets with hundreds of people. Telephone and electrical wire were conspicuously missing. At food stalls, there always seem to be a queue. Ice cream stalls included. We wandered to the outskirt of town along rice fields and vegetable gardens. A lone farmer was tending to them meticulously. From a temple, we could see the blue green mountain ranges and the new town- ships surrounded by golden rice fields. The most famous son from Magome is Shimazaki Tōson, a highly regarded figure in Japanese literature. There are a few museums here. At one shed, near the tourist office, I found an old samurai hat and overalls. One of the highlights of travelling within Japan is the sample local delicacies. The dishes may be the same, but each locality had their own flavour. We sampled some grilled rice cakes, “gohei”, steaming sweet buns, pickled beans and nuts.

“The whole of the Kisoji lies in the mountains.” – Toson