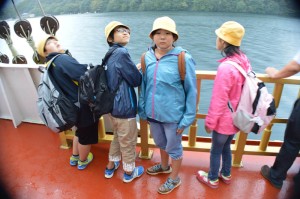 Nihonjin, as the Japanese people are called. My first introduction of Japanese is through the media with movies like Ultraman and additive TV cartoons characters. Then, in school, ploughed through history and geography books. As I grew up, the horror stories of WW11, more books and through interaction during my travels. With this basic understanding, I was not ready for the real thing in Japan. A worker stayed in the same employment till retiring and his son continues in the same company – obliging and subservient to employer and country. That was my early thoughts. At first glance, they looked homogeneous. 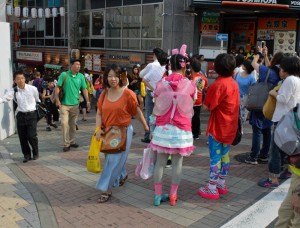 My first meaningful interaction was at our Tokyo hotel. Modesty prevailed, followed by: accommodating, respectful, hardworking and easy to smile. Perhaps those in the travel or tourist industry might be obliged, you might think, but in fact, I found these attributes widespread throughout the society. They were always helpful and courteous; on the streets, train stations and even at eateries. Mind you, most Japanese speak very little English. One of the highlights, daunting perhaps, is to “communicate” in restaurants, with no English menu or speaker! Words, pictures and hand pointing at other people’s dishes, help breakdown the barrier and enhanced the experience with the locals. Not forgetting the million dollar “blank, question mark faces”. When the food arrived, we gave a thumbs up, their faces lit up, priceless. Although the cities are crowded as in major train stations, the noise level is surprising low. In trains, people with cell phones spoke discretely and mostly with ear plugs. Being considerate is a culture. Cleanliness, both in appearance and environment, is 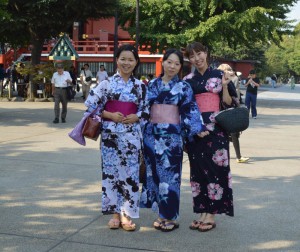 profound here in Japan. The conservative Japan is intertwined with ultra- modern, in places like Harajuku – where young girls in particular, imitate their popular anime or manga characters. Bright, bold, and colourful, yet someway conservative in demeanour – mellow. People are mistakenly looked as shy, but basically, they hold back due to lack of ability to communicate in English. “Broken language” by “gaijin”, foreigner is blissful. It makes people acknowledge each other and their presences felt. It does bring out at least a smile.

In a Kyōto public bus, as we disembarked, everyone seemed to have the right amount of change, except yours truly. I gave the driver a rather large bill to cover our cost. He took it, returned the change, put the amount owed into the box and bid us “arigatou gozaimasu”, thank you. All the passengers behind us, waited patiently, with no negative emotions. The bus driver, in fact, greeted to every disembarking passengers. I think it is beyond work ethics but embedded culturally. This was the norm in all the people we met – in trains, train stations, restaurants, streets, “onsen”, temples, hotels, etc. People queue everywhere – to alight into a bus or train, restaurants, entrance at sigh-seeing places, etc. Conforming is norm. At train stations, people don’t go on board the train, even when the doors are open and no exiting passengers, until announced. Emotions seemed “reserved” but when given is genuine. There will be exceptions to the norm, like everything and everywhere else. Then, there is the endless bowing, nearly everywhere. At our hotel in Tokyo, we had just returned from dinner. One staff rushed to press the lift button. We went in and turned around and noticed that she and her colleague behind the counter were bowed. We reciprocated for a moment. They were still bowing. As the door closed, we bowed again, not knowing the norm. Both these girls kept bowing until the lift door shut completely! The remarkable Japanese people had been one of the major highlight of our journey.