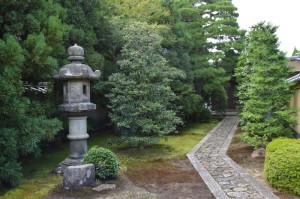 Ryōgen-in, the head temple of the South School of Rinzai-shu Daitoku-ji sect was constructed by Priest “Tokei” in Muromachi Period in 1502. We walked through a heavy wooden Omote- mon, gate which is an original feature of this temple. A winding stone pavement past an “ishidoro”, stone lantern led us towards the “Hojo”, Meditation Hall. The first of the four “karesansui”, dry landscape garden, Koda-tei, is set in a narrow path. Sometimes referred as Aun no Sekitei or A- Un Stone Garden which means inhale and exhale; heaven and earth; positive and negative; yin and yang or male and female. This garden expresses the universal truth of inseparable pairs. The original gardens here were created by Saomi.

We entered a large uncluttered dry stone garden, the Isshidan, in front of the “Hojo”. Three main features are a moss covered mount, Kama- jima, Turtle Island; two stone features, Tsuru- jima, Crane Island and the two large upright stones , said to represent Horai-san, Mt Horai a mythical and scared mountain that will bring about awakening to the living. A sea of white gravel of varying shades encompassed all the features – a symbol of the universe. Sitting on the wooden steps of the “Hojo”, one cannot help but to reflect and contemplate on the mere sight of this simple raked gravel and strategically placed stone garden. A simple dressed priest sat quietly in a corner of the “Hojo”. Perhaps meditating or merely observing. Painting of dragons and other images added a little colour to the interior walls. 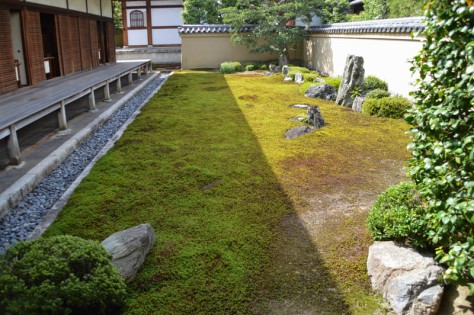 The next garden is the oldest garden in Daitoku-ji, Ryogin-tei garden. The moss covered garden represent the ocean or universe. The tallest stone, Shumisen-seki at the back represented the centre of the universe and a round stone in front of it is called Yohai-seki. These are representation from a Buddhist perspective. For some, it is time to reflect, for some it is time for relaxation and for some it is just being here. The simple things in life! In another corner is an inner rock garden, Totekiko, said to be the smallest “karesansui” in Japan! It is said the stronger the power of the stone (truth) thrown into water, the higher the ripples on the surface. We left with a deeper appreciation of the simple things.

“Ryogen-in also featured the smallest garden in Japan, but still maintained simplicity, elegance and most importantly a story to tell” – Navindd