Kyōto City with a population of over 1.5 million seemed uncrowded. It was the imperial capital of Japan for over a thousand years. It is sometimes referred to as the City of Ten Thousand Shrines. You will know why as soon as you arrive in this bustling city. Our first introduction to the city was via the “shinkansen” into the ultra-modern and stylish, Kyōto-eki, Kyōto Station. This towering building was packed with commuters, diners, shoppers and everyone in- between. Besides being a train station, it also has several floors of restaurants, department stores and shopping malls. On the roof top, the whole of Kyōto is on display. Ours was not as the weather was hazy.

Walking within downtown Kyōto, tiers of pagodas sprout from the glass, concrete and steel surfaces of the urban sprawl. Kyōto Tower raises high into the sky. After dark, the brightly coloured Kyōto Tower is reflected off the glassy surface of the station building.

The local buses, conveniently located at the train station, provided transport to all the major sight-seeing places. A 500¥ two-day pass offered convenience and takes the hassle of payment of fares. Bus drivers are polite, although speak little English, and very helpful. Patience with foreigner’s enquiries is remarkable. At every stop, the driver thanked each and every passenger. No one is rushed or pushed. This is exemplary of the Japanese people. 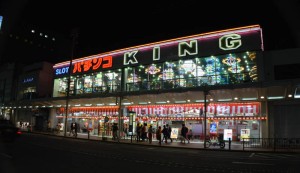 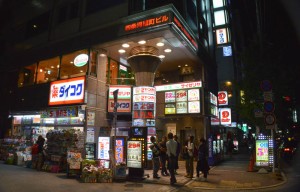 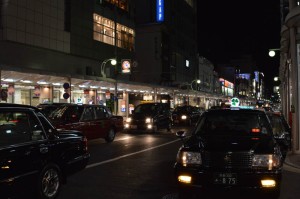 By day, we were busy travelling between the numerous sights – temples, restaurants and nearby streets. However, at night, with a much slower pace, the brightly lit neon lights come alive. Street food vendors set up stalls under narrow alleyway, signage and plastic display of dishes sprout at doorways and bright lanterns attract commuters to stop and refuel.

Loud pounding noises emerged from certain brightly lit premises. This is a national obsession and a gambling game – Pachinko. It is like a pin ball game but uses large quantities of rounded metal balls. It is dizzying, loud and smoky. These parlours can be found throughout Japan. The Japanese Pachinko industry is bigger than the Japanese auto industry. Yearly revenue is around ¥29 trillion (US$378 billion) a year. One in four Japanese spend an average of US$7000 annually!

A major shopping area along Shijo Street is centred on the intersection of Shijo and Kawaramachi streets. Bright lights from department stores offer branded goods. For arts and crafts, it is best to go off streets like Nishiki Markets and around Higasiyama area. Other major areas include the mega – Tokyo Station with its departmental stores and the two narrow Teramachi and Shin-Kyogoku Shopping Arcades adjacent to Nishiki Market. Little shops are dotted around the major tourist spots dealing in gifts and souvenirs. 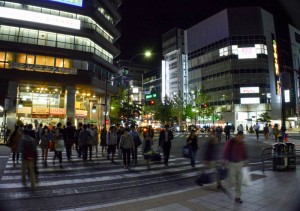 Although Kyōto is today a vibrant, crowded and modern city, the old and historic parts of the city provided a sense of serenity and transported to another world. The mixture of these cultural treasures, traditional and modern architecture, exquisite cuisine and history, all mingle seamlessly to form a unique environment.

The old ways are retained and lived every day. The numerous temples and shrines with their beautifully manicured gardens change with the seasons. Kyōto seems to be successful in retaining its past. The traditional way of life, dresses, the kimono, and the old shops houses, “machiya”, still functions in the city’s daily life. The conveniences of commuting around the city surrounded by mountains make it, not only a convenient place to travel, but a delightful one too. This is why we were so intrigued by this delightful and enigmatic city. I was not disappointed and my memories, through school books, of this old capital remained intact.