It rained perhaps late night or in the early hours of the day. The sky was dark, pregnant with dark clouds. However, it was peculiar. There was no wind, not even a breeze. There was not even a ripple on the water’s glassy surface. It was surprising as Easterlies were forecasted for today. It was 7 am.

After breakfast, we headed out to a mussel farm to do a bit of fishing in our dingy. I managed to catch three good-sized snapper and my prized catch was a feisty John Dory. “A good sized fish” exclaimed John. I was excited with that catch. I had only fished once before this accidental adventure. From here, we headed out to scout locations for scallops based on a word of mouth from other fisherman. Directions were vague and descriptions “literally everywhere”. We found none. Only shells devoid of the animal. Futile, we headed back to FitzRoy Harbour to refuel and refill the oxygen dive bottles. We headed back to the boat. 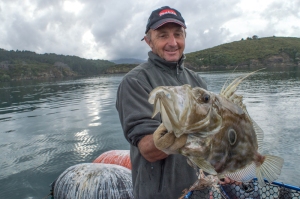 For lunch, I prepared spiced potatoes, smoked chicken, wilted spinach, butter toasted bun, spiced rice and scrambled eggs. It was a heavy lunch indeed. Hopefully John is contended. We left the harbour at mid-day. We continued to survey the coast for scallops again. At one site, the seabed looked shallow and sandy, a possible site. Nearby, gannets dived from 30m into the water to feed. It was an impressive sight indeed. A flock of terns circled frantically squabbling on the water’s surface. Small fishes jumped out of the water perhaps chased by larger predators. John dived into the emerald water with hope and anticipation. 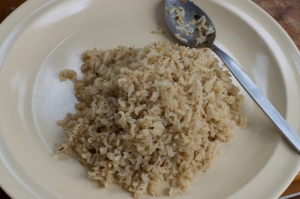 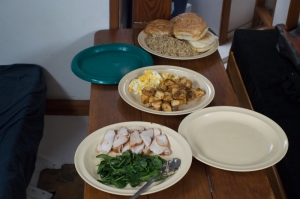 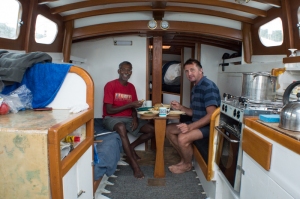 After forty minutes, John gave up looking for scallops. We prepared to leave Great Barrier Island. The sky was blue with little clouds but the rugged mountains were covered with thick dense clouds. There was only a slight southbound movements of clouds. Perhaps, the forecasted Easterlies were gradually making their way here. However, it was insufficient to sail the yacht. We left the tranquil water of the island coast around 2pm. 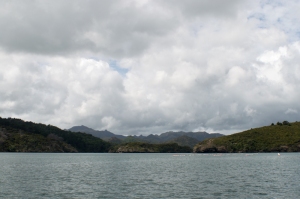 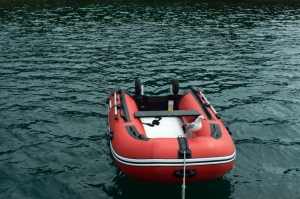 Storm clouds had built-up above Great Barrier and Little Barrier islands. Swells of over 0.5m to 1m headed starboard side. The yacht wobbled from side to side. After a while, John unfolded the main sail and this tremendously helped stabilize the yacht. The sun became more intense and I could feel my skin burn. There was nowhere to hide. Seeking refuge inside the cabin is unwise under prevailing sea conditions. As we headed southbound into the channel opening out to the Pacific Ocean, bigger waves began to hit the vessel. The channel lay between Barrier Island and the Coromandal Peninsula. Scattered outcrops, Pig Islands and an isolated conical mountain, Channel island lay in-between. 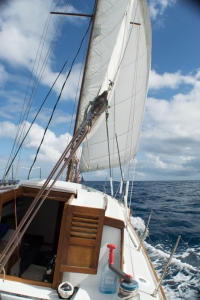 The storm clouds that had covered much of Barrier Island and the Coromandal Peninsula opened up and rain fell. Little Barrier Island was completely draped in rain clouds. The wind here had picked up. John unfolded the foresail or the genoa. Immediately the yacht leaned into the starboard side. One to two meter waves lashed onto the boat. However, the boat was steady. Finally, the anticipated Easterlies arrived. The boat that had been tracking about 5 knots shot up to 6 – 8 knots. The sun disappeared into the storm clouds. I was excited. John turned down the motor but just to keep plodding along. Now it was my moment to take control of the yacht. I can’t tell if stupidity or pure spirit of adventure got into me. I loved the idea and the spirit of exploration. Never mind if it had been done a thousand times before. For me, this was the first time. It mattered!