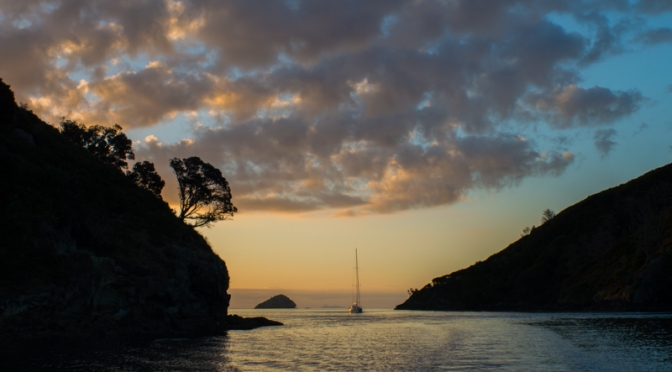 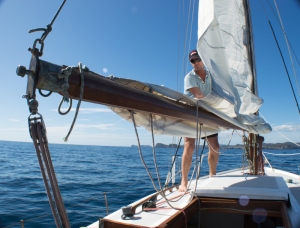 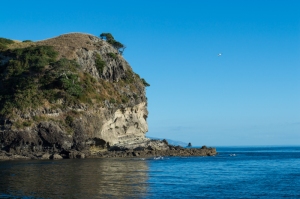 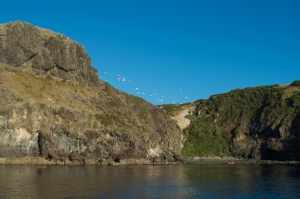 We finally arrived Great Barrier Island about 5 pm. It had been a long day on the water under a blue sky and burning sun. We anchored at a sheltered bay. A gannet colony had made this rocky slope part of the island their home. The island is vegetated with shrubs and small trees. A variety of birds flew past regularly. Bird life is abundant here. This bay is quite a pretty sight with calm water. Without the engine noise made this moment special. John decided to go for a dive. As he prepared, i noticed a large flock of birds feeding frenziedly just 50 m away. We decide to throw the fishing line. Within minutes, I caught my first fish, a decent sized snapper. When I was reeling in a snapper, a large pod of over 30 Bottle Nose dolphins entered the bay. They played and jumped around in this semi-circle bay. I was excited to see these wild dolphins in their natural environment. Some swan just meters off the boat. Some surveyed the rocky shores perhaps for shell fish. I intently watched their every move, their streamlined bodies as they moved effortlessly through the water. I loved watching them play, jump out of the water and blowing air through their blowholes. Some large ones had bruises and scars on their bodies. It was an uplifting experience. I caught five snapper and one Trevally. I only kept two snappers for supper. John returned with a single crayfish.

We let this wonderful bay as the sun began to set behind some scattered islands. It was past 6 pm. We continued our journey and approached a narrow channel that led towards Smoke House Bay. The sun, behind us, was setting behind Little Barrier Island. A soft golden sunlight was cast onto some of the uneven rocky outcrops.  Mt Hobson looked like a beacon. Temperature began to drop and dark shadows on the water looked cold.  We passed a DOC [Department of Conservation] jetty. We then entered FitzRoy Harbour. An isolated bay surrounded by lush green high mountains. A few boat were already anchored at Smoke House Bay. The dimmed glow of the day around this bay and setting was simply exhilarating and soothing. This can only be felt from the water. 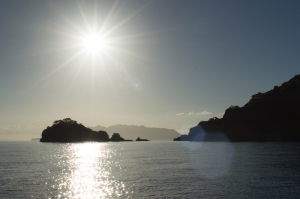 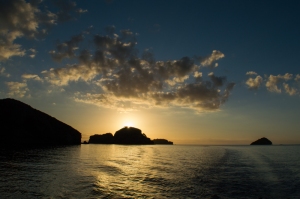 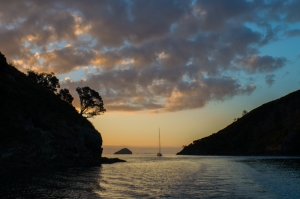 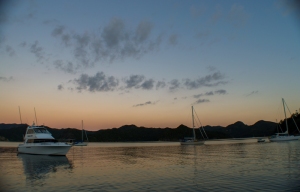 Dinner was late. The snapper was marinated with butter, onions, garlic and a little Cajun spice. It was wrapped up in a tin oil and baked. The crayfish was boiled in water. Then, marinated with lots of garlic and butter. Then wrapped in tin oil and baked. The meal was served with a green salad and warmed bread. It was a big meal. I could not sleep although surprisingly a very calm water. Above me, the beautiful Milky Way spread like magic. Satellites moved to re-position themselves. The night was cold. I had no blankets either. I managed to get a few winks. 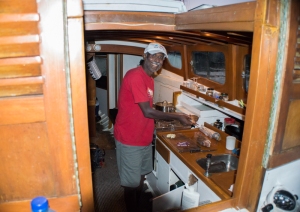 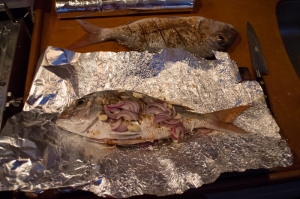 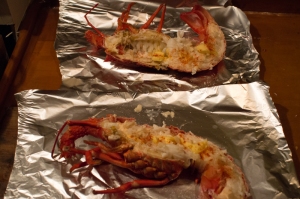 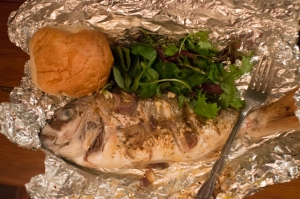 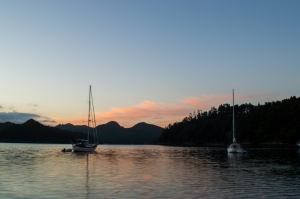