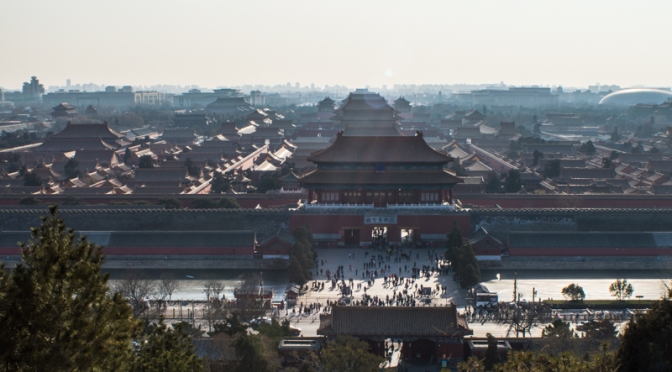 What do you do with all the dirt excavated to build the Forbidden City? Well, you pile it up and build an artificial hill. Then landscape it with greens and ecstatic designs to create an imperial garden. Furthermore, add a few pavilions for people to visit and rest and above all, to dig-in and appreciate the wonderful and magnificent views of the golden roof tops pavilions and maroon colored structures – the Forbidden City. 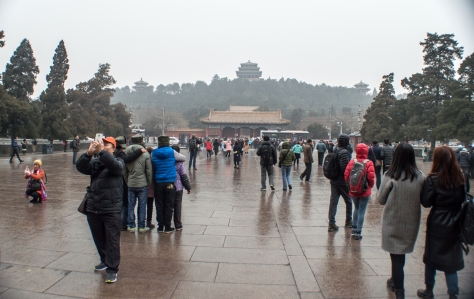 Wanchun Pavilion on Jingshan Park is such a place to appreciate this. Winding steps took us up the densely vegetated hill.  Besides the majestic views of the Forbidden City, other significant sights include the Drum and Bell Tower and the distant skyscrapers. The smog prevented this today. We had to be satisfied with hazy views.At the bottom of the hill, a lone lady sang melodious operatic-like songs to a small but appreciative crowd.

Jingshan Park is located immediately after the northern exit of the Forbidden City. It was indeed previously an imperial park. Located in the center of Beijing, it is a green lung, minus the smog. Wanchun Pavillion is crowded with people, as expected, to get the best overview of the magnificent Forbidden City. A must-see site in Beijing.