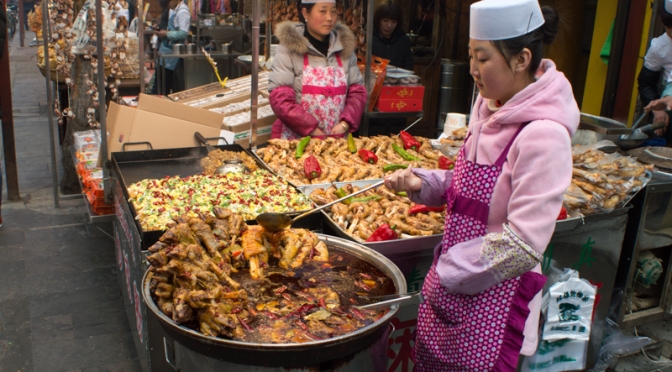 Xi’an is the capital of Shaanxi Province and is one of the four Ancient Capitals of China. Then, during its early metamorphosis, known as Changan, was the first capital of the Qin Shi Huang the man who united the rival feudal lords into one country. Located in North West China, it is through Xian that trade began with the west, the Middle Eastern states of the Arabic world. The starting point of the famed Silk Route to the West. Besides this, in my early school history lessons on China, I became acquainted with Qin Shi Huang Di, reputed to have unified China. The Emperor is also the character that created the iconic Terracotta Soldiers. I was quite excited to be in this renowned city of the by-gone era. The smog pollution continued from Pingyao to Xian. It was a long drive from the modern train station to the heart of Xian. The old city encircled by a Ming Qing 12m wall. However, unlike Pingyao, apart from the wall and exceptions of a small enclave of old Xian, everything was modern and towering buildings into the dark polluted air. The modern city roads had breached the wall and infiltrated into the old walled city. Today, metal, concrete and glass on show to rival any metropolis. In the evening, neon lights beamed from shopping malls. We stayed in the middle of it all, just across the softly lit Bell Tower and nearby Drum Towers. Both remnants of a colourful and historical past dynasties that ruled China. I wanted to get out and explore.

Near and around the elegant Drum Tower is a remnant of old Xian the Muslim Quarter, just below the Drum Tower onto Beiyuanmen Street. Generally referred to as Huimin Jie or Muslim Street. It is packed with street food vendors and behind them, restaurants. It is a hive of activities sales pitches; spicy aromas filled the cold air; raging flames from gas burners turned woks red hot and steam rising from bubbling soups. As the biggest festival in China is around the corner, Spring Festival or Chinese New Year, there is a sense of festivities on the streets. The narrow cobbled stone street is packed shoulder to shoulder with people.

Goat carcasses hung on rods, being stripped away little by little. Hygiene may take a new meaning here. Time for a late lunch of the Xians distinctive and favourite – Yangrou Paomo (Crumbled Unleavened Bread in Mutton Stew). It is quite a process to break down the bread into tiny pieces (takes a while as the bread is hard). However, Lee Cheng and Navindd testified that the taste is delicious. I settled for another popular north western food – the cold noodles (Liang Pi). Noodles are seasoned with a tangy, spicy savoury sauce and julienned cucumber.  Long queues formed at the Mutton burger (Ronjimo) stall. Another popular snack is the steamed stuffed bun. The bun is stuffed beef or mutton mixed with the soup (from the bones of sheep or cattle). People queued in long line at this stall.