We passed a park on our way towards the City Wall South (Yongning – eternal peace) Gate, we were greeted with a Whitney Houston song I Will Always Love You…….a light and sound show was being set up. Against the wall, huge banners and a stage under construction. Large lanterns were randomly placed. A PA system, large speakers and electronic gadget were being tested for a show, perhaps later in the day. I was quite taken back by the earlier sights as we made our way up the ancient wall. This was a historic moment for us. However! There were more surprises, the set had also been established on the wall. Large brightly coloured lanterns – a mythical horse with a cockerels tail, a yellow chick and many more. We continued to walk on the wall, to our relief, there were no more. Only the ancient Ming Dynasty wall and smog to contend with. 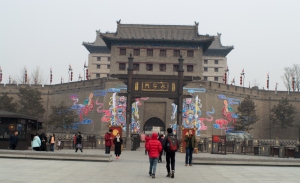 I read somewhere that there is an opportunity to cycle on the fortress wall. This wall was built by previous dynasties but during the Ming era, a bigger and stronger wall was built. Hence the existing Ming Wall. Although the pollution level was very high, at 320ppm, I looked forward to this ride. Past the moat and strangely as we entered through the South Gate We hired bicycles (be prepared to have 200 yuan for cash deposit plus payment) and went on our way in anticlockwise direction. The old outer wall was built during the Sui and Tang periods (around 194 BC). Changan, was the capital of Tang Dynasty. The existing Ming Wall (built around 1370) is only one seventh of the original Tang dynasty wall, which stretched to include the Big Goose Pagoda. It had been restored and preserved over the years by successive rulers. Part of the old wall may be seen in places. This Ming Wall stretches for about 14 km. Cycling was fun, although, the surface is uneven. Unfortunately, due to a heavy smog, visibility was very poor. We could almost see the silhouettes of tall modern buildings outside the wall. There are several main and minor gates, towers, a golden roofed Tibetan Temple along the way. At some walls, there is a steep narrow passage, probably to enable horses and men to travel up the wall. Some gate had several layers of structures. Small museums are also dotted around the wall. The whole walled city was surrounded by a moat. 12 km of cycling in the heavy smog should be done at a leisure pace, to avoid heavy breathing. We exited from the East (Changle – meaning eternal joy) Gate. It was a wonderful experience. I can only imagine the soldiers, horses and noblemen rambling along the walls and the flags fluttering in the wind.