I have been to Sabah several times. Sandakan is a new destination. The main reason – to explore the mighty Kinabatangan River on a river cruise. We checked into Four Point by Sheraton, ideally located at the heart of Sandakan, overlooking Sandakan Bay and Sulu Sea. Nearby is the harbour and fish landing base, central market and a walking promenade. To see my photos, go to Kinabatangan River

Sandakan buildings looked tired but have a delightful old-world village vibe about it, especially around the central market and harbour. In the morning, rickety fishing boats laden with their daily catch arrived and unloaded. This include, sting ray, prawns, sharks and an assortment of fish. Ice blocks are transferred from lorries to the market via ramps. The fish market is busy. So is the adjacent produce market. I love markets as they are a great way to soak in local culture and gauge the economic prosperity. Outside the central market, impromptu stalls sell all kinds of produce from night to early morning. It becomes a car park after 7am.

A great way to experience this old town is walking the Sandakan Heritage Trail (about 2hrs) – we started at the old town’s 100 year old Masjid Jamek – a quaint square with William Pryer Monument and the Sandakan Heritage Museum – a steep climb on the a rather unkempt 100 steps staircase through a forest surrounding – sipped tea amidst great sea views at English Tea House with an English colonial architecture – Agnes Keith Memorial, then called Newlands. Once occupied by American author, Agnes Newton Keith, amongst which wrote the Land Below The Wind in 1939 – little remains of an old staircase to nowhere – pay respects at Kun Yum Temple (Goddess of Mercy Temple) – Saint Michael’s and All Saints Church – Sum Sing Kung (Temple of Three Saints), opposite the town field and back to town. A short ride to Puu jih Syh Temple, high on a mountain, provides wonderful views of rustic Sandakan and its coast.

In the evening, head to Kampung Buli Sim Sim for some seafood dinner over swaying water. It is overpriced but you should try it once. There are several eateries to choose from. Ask the locals for their recommendation. My favorite is the out of town, Kim Fung market – from breakfast to supper! Try the handmade Youtia (Yew Char Kuey), Tow Foo Fa and many delicious local dishes. Others include Kong Teck (homemade noodles) and San Da Gen Kopitiam, a cafe style and the food court above the central market, in the old town. You won’t go hungry in Sandakan. 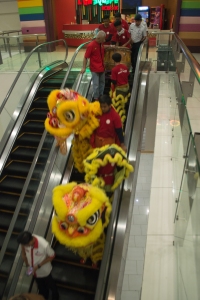 Rhythmic drums echoed through the old town as a golden dragon made it way through. Even dragons use elevators (inside the mall)! Today is Chinese New Year. In the evening, the waterfront is the place to be – watch the sun set and stalls opening for business. After dark – durian, mangosteen and langsat seller occupied the pavements to sell their wares. Nearly everyone eats on site. That way, you don’t pay for bad ones. Just watch out for pick-pockets!

One thought on “Sandakan – a rustic old-world vibe”