The taxi driver waited patiently at the hostel. I planned to hike the affectionately named, the Chappies – Chapmans Peak on the Atlantic Coast between Hout Bay and Noordhoek.  I had no choice but to hire an expensive taxi ride as there were no public transport on Chapmans Peak Drive. It was around 9 am when I was dropped off just before the toll on Chapmans Peak Drive. It was a lovely ride along the coast passing through picturesque towns, white sandy beaches and secluded coves and bays. I approached two elderly women whom were waiting for their transport. I enquired about the starting point towards Chapmans Peak. They looked with bewilderment! They were curious to know how I would return to Cape Town, is anyone aware of my plan and whereabouts and if I had any cell phone for emergencies. My simple answer to all their queries was negative. They were concerned. I thought I would just walk as long as possible and hopefully get a ride back to the Mother City. I just wanted to walk. They informed me that the starting point was several kilometres away. On this narrow road, sandwiched between the Atlantic and the vertical and rocky Apostles, I weighted my options. There was a trek just above the road. It looked steep. They informed me that this will also take me to Chapmans Peak but required an additional two hours. I had time. Today was sunny with a clear deep blue sky. On the mountain slope however, a dark shadow dominated the slopes as the sun was still below the peaks. The air was crisp and smelled fresh. It lifted my spirits. I walked uphill past remains of a stone fort into a gully like rocky trek.

With a little elevation, the early morning views of Sentinel Peak, the working harbour at Hout Bay and the shimmering deep blue sea was stunning. The foreground however was darkened in the shadow of the great mountain peaks. Unlike trekking on Table Mountain, today, the fynbos vegetation and numerous varieties of Proteases were exposed. The flora was distinctive, quite unlike any vegetation that I had witnessed. I loved the wilderness and the isolation. A jogger with a dog in tow went past and I just reconfirmed that I was on the right trek. I was alone with the elements and the rocky slopes of the formidable Apostles of Table Mountain. The well maintained rocky trek seemed to lead toward Chapmans Peak. At least that is what I had thought. My trek was soon, blissfully welcoming, was side-tracked to little fluttering rainbow coloured birds. The Sunbird. I was amazed with its wonderful array of colours and its fearless nature. The varieties of Sunbird was numerous – hues of yellow, blue, green, red, purple. All shimmered in the soft morning sun. They flew in short burst, sometimes hovered over flowers, like humming birds, feeding on the sweet nectar. They darted from one flower to another in quick succession. I wanted to capture these industrious birds on camera. I aimed and pointed but as I released the shutter, they moved to another site just a meter away. I tried numerous times and the result was the same, out of focus or totally devoid of the subject. My trek was slowed down as I was determined to capture just one picture in focus.

I walked back and forth chasing the magical Sunbird. The trek became “chasing the Sunbird trek”. The sun was already up above the rocky mountains, the views toward the water and the surroundings, became more impressive. White waves created by fishing boats leaving the harbour disturbed the otherwise still deep blue water. The dark shadow cast by the mountain extended towards the edge which dropped into the ocean below. A winding road, Chapmans Peak Drive, was wedged between the mountain and the sea. I told myself to get going and not be absorbed by the wonderful birds. I walked past a refreshing waterfall with an assortment of luxurious trees and shrubs literally below my feet. From here it seemed to be a long way up. I finally reached the “starting point” after two hours. From here-on the trek led uphill. The illustrious fynbos vegetation weaned off and left only with irregular rocks. I was alone with only a slight breeze and the blistering sun for company. Here, the formidable mountain was tumbling towards it birthplace, the sea.  I reached the top of the peak. I was surprised that there stood another peak, completely obscured earlier. However, the impressive views continued. I habitually do not wear a watch. The sun was high. It was nearing midday. I was a little concerned with time but brushed it aside. The journey took precedence. A downhill walk led me to an intersection and a little sign indicating some directions. One led uphill into the mountains and the other, which I took, led towards a mountain peak. On a ridge in an open high meadow, the wind blew strongly. From here I had my first view of the Ends’ of Africa – Cape Point. The white sandy beach coastline on the Atlantic stretched a long way . Several townships lay below on the south-west coast – Noordhoek, Slangkop and Kommetjie. In the distant south east was the coastal town of Fish Hoek, on the shimmering False Bay – hopefully my next destination. Before coming here, I was informed that there is no transport to Fish Hoek from the west. My only option to return to Cape Town was to get a ride back by road to Hout Bay via the Chapmans Peak Drive! I just took my chances and hopefully a kind soul would help me along the way. In the worst case scenario, I may need to catch an expensive taxi ride back, something that was in the back on my mind. 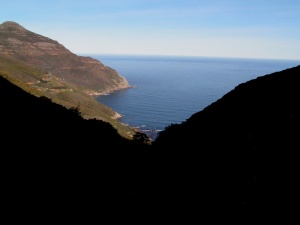 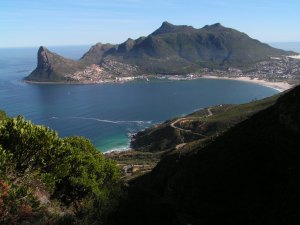 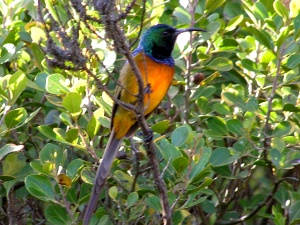 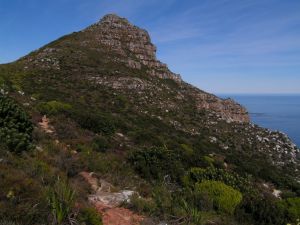 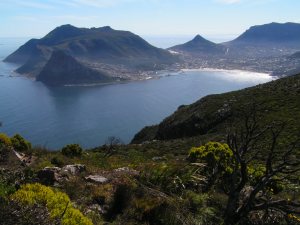