In the gusting wind, I heard voices. I climbed towards the top of the peak over some granite boulders. A few Park Rangers were having a relaxed break. I have been walking for over five hours without any human interaction. A small signage indicated this is indeed Chapmans Peak. The views over the entire Table Mountain National Park was stupendous – Sentinel Peak, Lion Head, Devils Peak and Table Mountain and the Apostles were all visible but hazy in the afternoon sun. Chapmans Peak Drive wound and hugged around the steep mountain slopes with some precarious drops into the Atlantic. From the peak, I could see a downhill trek that led in the opposite direction towards Noordhoek. A ranger confirmed this. He too enquired about my return journey to Cape Town and informed that there in no transport to the east coast. I was disappointed. Instead of back tracking, I decided to walk towards Noordhoek. Call me ill-prepared. This downhill trek was steep but gradual, and from the cliffs were vertical drops into the ocean. With a little decent, I was surrounded by the familiar unique fynbos vegetation. Slangkop lighthouse on the coast was like a beacon guiding me to civilisation, hopefully a transport. There were some unique cultivated and manicured vegetation that resembled a cult-like habitat or community. After an hour and a half, descending the last leg on wooden steps, I reached Chapmans Peak Drive road. Noordheok lay several kilometres away. The sun shined intensely. I was tired but determined to continue and await my destiny. I exited this magnificent road after seven hours of walking – longer than I had planned for.  I was curious to find a bus stop sign. Where did the bus go to? Perhaps, to Noordhoek. Eventually one did appear after a half hour wait. I was just happy to see one. My legs were not cooperating well at that point. I entered the bus and stared at the driver, not knowing where this bus was travelling to or where my next destination was. There was silent stalemate. The driver just uttered one word, Fish Hoek! Yes, finally the answer to that pondering question that began before I even started out from Cape Town. Answered in one simple word. In my joy, I sat down without paying the driver which he eventually demanded. I wanted to inform all the people whom said there was no transport from here to the west coast that there was one. I was just happy to relax and enjoy the bus journey. 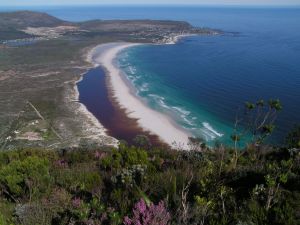 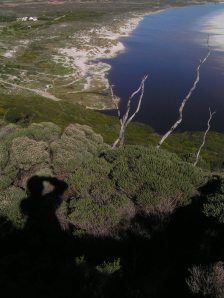 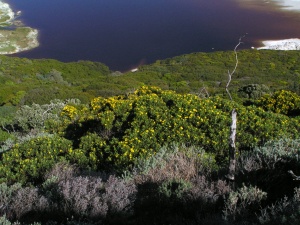 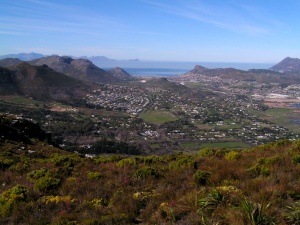 The coastal town of Fish Hoek, on the calm shores of False Bay, smelled of fish and seawater. It was sweet. I boarded a train to Simons Town. A curious little kid kept staring at me. The train route followed the delightful coastline. Houses were built from the narrow flat lowland and led uphill. The main roads ran parallel to the rail tracks. Simons Town lies in a sheltered bay on the east coast of Cape Peninsula protected by the high mountains on the west.  From the train station, I walked towards Saint George Street. Classical colonial homes line the waterfront street. Most have been converted into retail outlets. It is a lovely stroll amongst these wonderful architecture buildings. It is not quite “Africa”. From here, a few kilometres lies the popular Boulders Beach. Its popularity comes from the permanent colony of African of Jackass Penguins. Within the conservation area, they build nest into the sand and under the canopy of shrubs. They are not disturbed by presence of humans. At one section, you can get into the water and swim with the penguins. It was an experience seeing these petite creatures going about their daily routine in their natural surroundings. Large rounded granite boulders added a dramatic landscape especially in the setting sun against the deep blue water. In the distant, silhouettes of boats and land created a tranquil setting. I rushed back to town and eventually caught the last Metro Train back to Cape Town passing through lovely and quaint water front towns of Kalk Bay and Muizenberg. It had been a long day but the efforts were worth it. This journey eventually did bring to light about accessibility with local transport on the southern peninsula, west coast to the east coast and vice-versa. I went with little hope and lots of determination and eventually found a, rather relieved, solution. 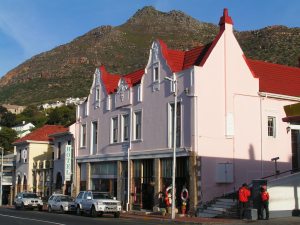 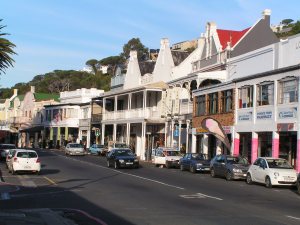 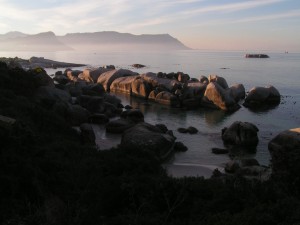 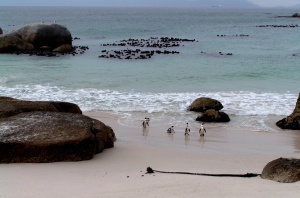 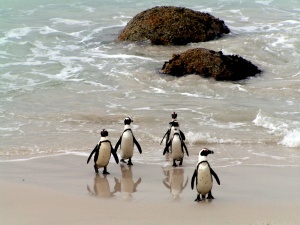