After a quick but hearty breakfast, Albert brought us to our stating point. Unlike most people who start at the Timpohan Gate, we started at Mersilau Gate. This Mersilau trail is longer by about 2km adding about an extra 2 hours trekking time. However, this trail is gradual and the exposure to the mountain environment is greater. 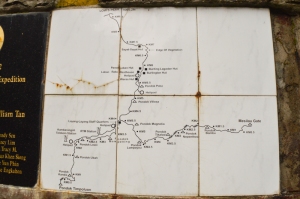 Through paved winding roads surrounded by pristine native forest, we arrived at Mersilau Gate around 7.30am. There is accommodation here. Being here feels amazing. Breathing the freshness, listening to the sound of a waking forest, seeing the mist lifting above the tree canopy and feeling the coolness of the jungle on my skin, I felt invigorated and spirits lifted. Although, I had been in many forests’ before, this feeling doesn’t seem to ware off. We handed over our documents to the rangers and met our guide, Azman, a native to this area.

We set off on the trail around 8.30am. This time around, I decided on the Mersilau Trail starting from Tambang Gate (2000m). Most people seem to hike from the Timpohan Gate. Mersilau trail is longer by about 2km or about 2 -3 hours walking. Today, there were about 10 hikers. It was hot and humid once we entered the forest. Perhaps, it was due to sweat pouring out of my body. A result of the steep climb. This is Lowland Dipterocarp Forest. Vertical tree trunks reach for the invisible sky as the tree canopy form a thick cover. Within the first hour, I could feel the strain on my body. Again, I am attempting to climb Kinabalu in a rather unfit state. Perhaps, better to have climbed Kinabalu and carry on to China. Wishful thoughts in hind sight! Navindd was as pace with our guide, Azman.

Fortunately, although wet and humid, the trail was good. Not muddy or slippery. The trail is uphill with occasional decent. With regular stops and slow walking, we managed from one shelter hut to another. A slow progress, and thankfully not painfully as I recalled my first climb. Now we entered the Lower Montane Forest. Gradually, the tree canopy opened up as the trees become shorter.  We had crossed a river earlier and now another small wooden bridge over a tributary of West Mersilau River. It is refreshing but no time to linger too long. We have already reached above 2500m.The vegetation here is different. Moss hung off tree branches, dense undergrowth and bamboos and orchids appeared. Azman introduced me to Rhododendron lowii, a bright large yellow flower. Nearby were orchids and other epiphytes.

As we continued, we came across an impressive cluster of Pitcher Plants or Nepenthes. I remembered seeing larger ones on the Timpohan trek. Now we had entered the Cloud Forest. These part of the mountain are constantly drenched with moisture. This encouraged epiphytes and moss to flourish. Liverwort and ferns covered shaded parts of the forest floor. Gradually the height of trees reduced and the canopy opened. Grass like plants became more frequent. An assortment of flowering plants also sprouted in pockets. We stopped for lunch at Magnolia shelter, around 2.30pm. We thought the guide would provide lunch as arranged by Sutera Santuary. To Azman’s surprise, there was none. Neither did we talk to him about it earlier. We survived with a few chocolates and biscuits. Shortly after that, we walked into an open area on the ridge of a mountain. Steep slopes on either side. The views were great but partial due to low mist and clouds. The trail seem to be descending. Walking became relaxed. Eventually we arrived at Layang-Layang Hut (2702m) intersection where both trails met, from Timpohan Gate and Mersilau. We had hiked about 5.5 km. The circumstances at this point were in contrast.