The immediate impact was the crowded trail. A large group of hikers, some with identical attire, climbed the mountain today. Later I found that they belonged to a non-profit group making up to a 100 people. I belief that only about 150 people are allowed to climb per day. It looked like peak traffic on the narrow trails. However, the atmosphere was pleasant. The quiet contemplation that comes with climbing in high places was lost. Trees thinned out and whatever was present, were stunted and twisted. Some were permanently swayed onto one side. Rhododendron plants seem more prolific and some in flower. Undergrowth is thick. Fortunately, it was cloudy which eased climbing. I relived the vivid memories of this subalpine meadow zone. Old man’s beard  (air plants) hung on branches of the skeletonised trees. This added dramatic sceneries. Higher up, I could see the rocky plateau. The walk from here, at over 3000m, was exposed. With chattering from other hikers and the dramatic sceneries, I slowly made my way up. Words of encouragement and support was occasionally heard. Navindd was keen to carry on and he took off. From here, there are no diversions and not likely to get lost. The trail is not dangerous here. 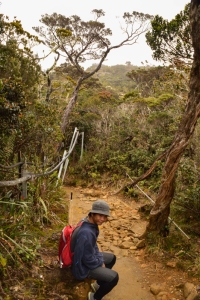 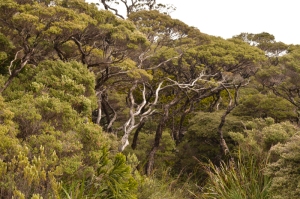 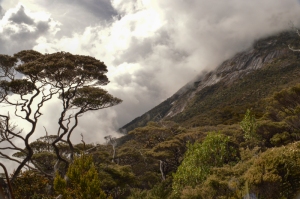 We reached Laban Rata, 3273m, our stop for the night, at around 5pm. It was crowded and noisy. Dinner was already in full swing. Weary and tired, we checked in and almost immediately at the dining table with a hot meal. It was satisfying for me to have climbed this far without any injuries or pain. Tiredness is normal. The mantra to climb any mountain for me is try to walk continuously with regular but shot stops. Being fit is a requirement, which I had not heeded this time….again. Our accommodation was warm, although no heating was available. Several other huts were scattered around. It was already misty and cold. The views of the unique landscape were obscured. Fortunately, throughout the trail, it only rained intermittently. The paths and black rocky surfaces were already wet.

One conversation that evening was about attempts by hikers to reach the summit in the previous days had failed due to poor weather. We hoped for the better. The other conversation, by hikers not part of the big group was, what time do we start walking the next morning to beat this crowd? From here on, the trail became narrow and in many stretches, probably single file. It rained. I looked around the room, everyone seemed happy just to have arrived here. Like us, just happy to have a hot meal in hand.

Navindd and I had a shower and readied to get some rest and sleep. Our dorm room had four beds. It was certainly cosy and surprisingly warm. However, it was noisy with the large group. It was already dark after 6pm. Hikers were still arriving, drenched and shivering, around 7pm. Some of them just 10 years old. I wondered if the had enjoyed the hike? At these heights, altitude sickness can hit anyone. There were some signs amongst this group. However, help was on hand.We had a plan for next morning. Wake up at 2am and after a light snack, attempt for the summit. Being a light sleeper, I had difficulty sleeping with the constant walking and knocking by people arriving late at the huts. Navindd had no such issues.