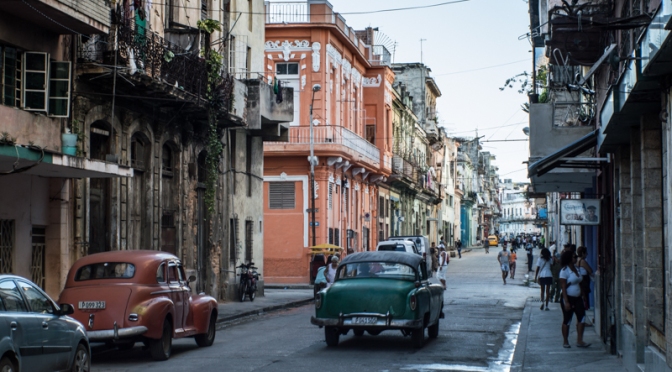 I headed back to Pastelaria Francesca for breakfast. Freshly boiled Cuban coffee was uplifting. Not too sure about the pink interior. Service can be erratic and sometimes you wonder where all the waiters had gone. Today the lady behind the counter was delightful. Paseo de Marti was crowded with cars, buses and people surrounded by impressive colonial buildings including the off white and under renovation Capitolio building, the Gran Teatro de la Habana and Hotel Parque Central bathed in the morning sun. Old American cars and “newer” cars along with bici-taxis, bright yellow egg-shaped scooters, horse carts, “collectivo”, Shared taxis, cramped buses and horse carts occupied this busy main street. Amongst these were immaculate and shiny ‘Old” American cars with open-tops and leather seats parades around the Central Park. A joy ride for a price. This place in Centro Habana is a hive of activities amidst a heavy smell of diesel fumes. Opposite is the green lung Parque Central, Central Park where I caught the bright red open-top tour bus. It is a great way to see Habana’s highlights and costs’ only 5CUC. Part of the ride goes on the grand Malecón, Plaza de la Revolution, Necropolis Cristobal Colon, and the coastal Miramar area. My purpose was to head to the Costa Rica Embassy to sort out my visa. Delays yet again as there was no response from San Jose. 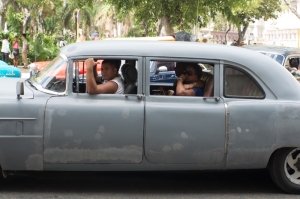 This part of Centro Habana is a great place to people watch and check out the high end accommodations like the Parque Central, Inglaterra and Telegrafo Hotels. Then, there is the majestic Gran Teatro de la Habana (theatre) and the iconic Neo-classical and Art Nouveau style Capitolio. Unlike the mellow residential areas, this area is bounty with activities, people and music. To get some respite from the balmy heat, just pop under the canopy of the trees in the Parque Central. Watch the street touts doing thing and the women flaunt their bodies. Everything seemed uninhibited and casual. 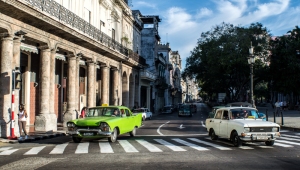 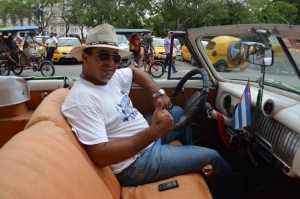 My internet requirements are courtesy of Central Hotel – just buy a phone card from the bar and head upstairs into a private room for the terminals. Comfortable and convenient. However, they do have the option of saying no! Be nice. And after that, if you fancy a ride in one of the tuned-up classic American open top cars, there are plentiful around this area. It was not compelling enough for me. From here I headed to the train station, hopefully, to secure a ticket to Santiago de Cuba. The staff however was unwilling to give me one. “No para turista , solo para los cubanos”, not for tourist, only Cubanos. I left disappointed. Perhaps I should have brought a Spanish speaker.

In the hot afternoon, just off the main drag at Parque Central near Calle Obrapia, I entered Cafe de Frances. I was back into Habana Vieja. I was sweating profusely as the blinding sun shone directly into the cafe. The oscillating fan helped a little. I wanted a paella. I have some limitations of what I eat – no meat especially pork and its derivatives, chorizo and sausages, that is commonly used.  I wanted vegetables and seafood. “Jo qiero paella de verduras e mariscos”. Order done and the wait began. This is an atmospheric cafe and bar and fantastically located. Schools girls in short navy skirts and knee-high socks laughed and played in a nearby school. A big dish was served. Perfect – shrimp, fish, langoustine with a few vegetables.  It was a filling but satisfying meal.

I ventured deeper into old Havana. I started at Plaza de Armas. This is the oldest square in Havana built in the 1519. It is a tranquil place with shaded Parque Cespedes. This part of old Havana is high restored. Cafes, bars and restaurants lined the perimeter of this plaza including a high-end hotel. The huge Palacio de los Capitanes Generales, former official residence of the governors (Captain Generals). On the paved street, many impromptu used books stalls had been set-up. No one is in a hurry and the quiet pace was perfect on this humid day.

Walking aimlessly in this part of town was great. In the well restored streets people, tourist and locals, wined and dined. Restaurants staff entice people to try their fare or just to have a drink. Music filled certain parts of the streets. Calle Obispo and Mercaderes (Merchant Street) seem to be the most popular. I refueled with sweet snacks from local vendors along the streets. At one shop, a lion dance and beating of drums caught my ears. A group of Chinese all dressed in traditional outfits celebrated the opening of this outlet. Time passes slowly but the twilight was creeping in. I continued wandering along these wonderful colonial buildings and arrived at a cafe filled with patrons.