Later in the afternoon, at Panorama Hotel in Miramar, near the beach with wind swept coconut palms, I met two guys with a parked pink classic American car. He had a breakdown and awaiting for a mechanic. I asked if this happened often. He had just rented this car to earn some money and hoped this incident did not happen often. The conversation changed to my cost of travel and living expenses in Malaysia and New Zealand. One of them is an engineer. He earned about 35 CUC a month. His electricity bill and living expenses far exceeds his earnings. He had to find ways to earn and pay off the difference. Daily lives hardships are visible everywhere. Like everyone else, they make do with whatever they have or can get. The one thing he is rich with is confidence, laughter and hospitality. A common attribute of most people I had met. 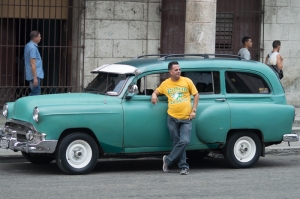 One iconic image of Cuba must be the classic American cars of the fifties. They come in all shapes, size and make. This includes Chevrolet, Pontiac, Buick, Plymouth, Dodge and Bel Air. Especially in Havana, there are everywhere. Most of the shared taxis on the road are these cars. These cars were imported in the hey days of the American controlled economy. After the revolution and the American trade embargo, the repairs and maintenance of these cars deteriorated as spare parts became unavailable and unaffordable.

So how have the Cubans’ managed to keep it going. Look closely what is under the hood. Exterior is the most original part although some sort of decapitation and reattachment had tactfully taken place. Under the hood, parts from mainly Japanese cars had been cannibalized. These began as desperation and eventually bloomed into Cuban ingenuity. Make do with whatever they had. It is still a great sight, like being in the movies. Only thing is it is real life to the locals. Unfortunately, these cars are the cause of the black chocking fumes that plaque the streets of Havana. If you have any thoughts of getting one as the trade embargo eases, think again. Remember, these cars are still running due to Cuban ingenuity. They are not “wholly” genuine. Buying one is the easy part. Getting it to be near ‘original’ state is another matter with huge cost outlay! In my view, these cars belonged here, only in Cuba.

I strolled around looking into buildings. Posters of past leaders especially Cienfuegos, Che Guvera and Castro are pasted all over on walls and within buildings. Some of them are propaganda messages. The famous saying – Socialism or Death! These are just examples of who is in charge and what they want the people to hear and see daily. However, life goes on. 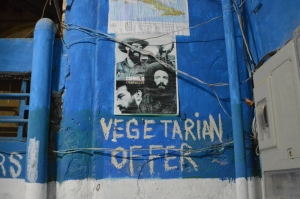 My final evening in Cuba, I walked around Old Havana’s colonial quarter. Near the Cathedral, on Calle Emperado, I met artist Sanlly Viera. His paintings mainly captured Habana’s daily lives and street scenes. With the potential of well-heeled American tourist, he may be in an advantageous position to improve his business hence income. The people involved in the tourist will certainly benefit directly from the potential influx of tourist. What about those on the fringes, like the butcher, the farmer, the street sweepers I see daily on the Malecón? There will be some income to the State from the tourism industry, it will certainly be insufficient to expand its coffers to pay for the urgent need of fixing the crumbling housing, and basic amenities. Let alone expanding the property markets. Releasing business to operate privately will certainly bring the income through taxes, but will take time to build up. What about employment, as most of the working population is under the State’s payroll. How is their income going to improve? Only time will tell. However, the anticipation of positive change has the man on the streets ‘excited’. A promise of betterment from the current culturally rich and economically poor lives.

In the early evening, I again wandered around Centro Habana just to sink in the last sights of what I believe is a unique environment – a mixture of a past colonial architecture, hardship caused by politics and aspirations,  a nation held to ransom and the admiration of the people’s ingenuity and self-reliance. The romance of Hemingway’s Havana is certainly alive today. There will be changes but how is this going to affect each Cuban. Living on low wages, mostly employed by the State with an average income of US$30 per month. The cost of living will rise, how is the average Cuban going to cope with this? If foreigners are allowed to buy properties, how can the locals compete, financially? These were some of the questions in my mind as I strolled down the narrow but atmospheric streets.

At Plaza Cathedral, a few restaurants are scattered opposite the Colonial Art Museum. I met Senora Habana as she was heading home. We greeted like old acquaintances. The dinner was great. I strolled through the old renovated streets towards Plaza Francisco and eventually ended at Francesca. One last coffee accompanied by typical live Cuban music from the nearby hotel. The full moon shone brightly on Capitolio and the magnificent theatre. A guy walked in, shook my hand and offered a “la chica”. It was like talking about sports or travel. Just a normal coffee table conversation. This cafe had been a great place to savour Habana’s street scene and to have a break. I just wanted to continue wandering the streets but it was getting very late. I retired to my casa. 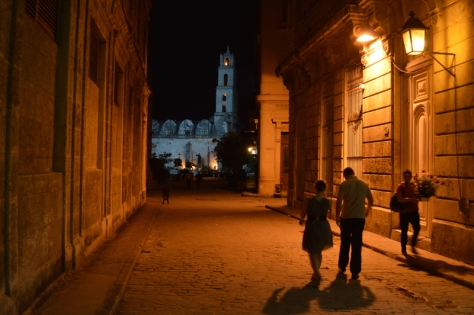 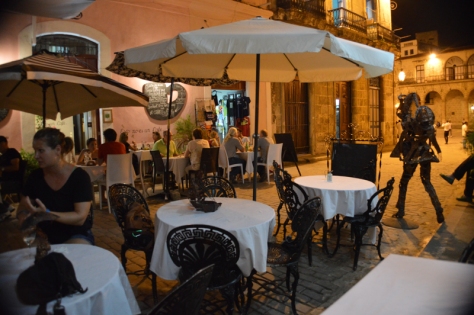 My final day in Cuba. One day shorter than I had planned due to last minute changes by the airline to my outbound flight. In my casa, a lovely young girl (couldn’t remember her name) was helped maintain the place. After a big spread breakfast, I had an hour before Yani, my taxi driver, is due. Her reminder, sharp 10am, rang loudly in my head! When I opened the door, an elderly woman sat at the doorway. She had a calm look and gave a gentle smile. She epitomized the Cuban people – calm, inner happiness and simple. Next to my casa, on the same block is a vegetable and butchery store. The prices of items were listed both in Convertible Peso (CUC) and Moneda Nasional (CUP). An assortment of beans, the main local diet – rice and beans; fresh vegetables like long beans, onions bulbs, yams; and fresh fruits like pineapples, papayas and bananas. Next door, all parts of “cerdo”, pork meat, was chopped up and displayed on the shelves. The place was clean. At the end of my street, I took in one last sight of the pastel building blocks; stripped wall exposing the orange bricks underneath; the roar of a modified old car; the chatter and laughter of the residents on this street; the sound of some construction work nearby; the fluttering of cloths hung on the balconies and a fading call of a street vendor.

Cuba is a living museum. I considered myself lucky to have been here with eminent change on the near horizon. To have witnessed, touched and experienced a little of Castro’s Cuba.