Today I took a private taxi with Bruno and the other passenger, lovely Sarita, to Trinidad in Central Cuba. The highway is dated but still good. A few cultivated areas under paddy. Past Cienfuegos, huge tracts of land, some till the horizon, were cultivated with sugar cane crop only. The main roads become local roads where horse driven carts and tractors on the road were common affair. Hitch hikers stand on roadsides with raised hands clutching some cash. In these parts, public transport is slow and limited and the locals depended on getting lifts from road users. I noticed a highway police vehicle, a white Fiat, stationed on one section of the main road. We stopped for fuel along the way, at someone’s house. At a petrol pump, the price was 1.5CUC/Litre. The journey brought us to the Caribbean coast all the way to Trinidad. Sarita invited me to her house for a visit as she handed her address to me. I was a maybe as Sarita only spoke Spanish. I had no confidence with my ability to communicate. Perhaps? She went off.

It was bright and sunny when I arrived in Trinidad in early evening. I checked into my pre-booked Casa (Nilda) on 518 Calle Frank Pais | Entre Piro Guinart y Fidel Claro. It was a great room with a balcony on two storey terrace building. From here, there were great views of the blue-green mountains and the tiled roofs of the colonial houses. The rooms were airy and unlike in Habana, not cramped between blocks of apartment buildings. 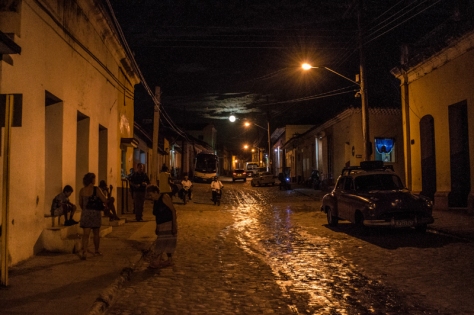 The whole old town is paved with cobbled stones. Unlike the close proximity of houses in Habana, most people rested indoors. The houses are spacious. However, the furnishing, like in Habana, bulky wooden furniture with wicker or rattan base is frequently used. I loved these furniture. Iron grilled windows protected any unwelcomed intruders. It also help keep some pet dogs at arm’s length from the street. As I walked through the streets past many pastel coloured houses, there is a sense of slow pace. There is no hurry to get to anywhere. I continued walking with curiosity, intrigue and new experiences. I was like a child again filled with glee and discovering new things. Trinidad is rich with great photographic opportunities. Churches, plazas, music, historical buildings and wonderful architecture and friendly locals are condensed into this one charming old town. This colonial town has it all.

Trinidad colonial town is a UNESCO heritage colonial town oozing with character, charm and old world nostalgia. It is magnificently located between the refreshingly green Escambray Mountains, Sierra del Escambray, in the north and the inviting Caribbean coast in the south. I could not wait to explore this wonderful town. The night was lit by the full moon. I ended at a small plaza with a church bell tower. A few people relaxed here with couples having private conversations. From here, I headed straight towards Plaza Mayor, the old towns’ centrepiece. It was simple. A small garden park flanked with tall swaying palm trees and sitting areas. At the plaza’s edge, a simple concrete church, the Iglesia Parroquial de la Satissima. A series of cascading stone steps led towards Casa de la Musica. Another of pastel hued row of houses snaked up the hill. 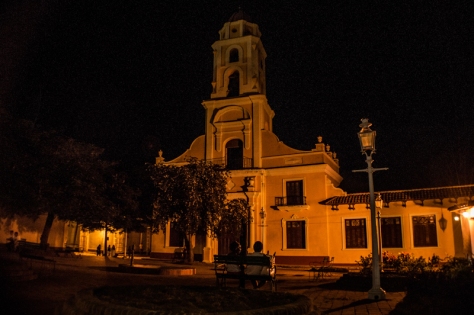 This evening I decided to have dinner with Senora Nilda, my host at the Casa. After a lovely dinner, I headed back, in the cool of the evening, to Plaza Mayor. Music filled the air. There were a few establishments with live musicians performing the distinct Cubano sounds – salsa and son music. Mostly tourist gathered on the stone steps at Casa de la Musica. They were not going thirsty as supply of drinks was provided by boys from various bars nearby.

I wandered off away from the plaza. It was quieter with only a few people on the streets. I tried a mojito. This was not a bar but an art shop away from the main drag. Portraits of Che hung on the walls. I returned and settled on the steps of the church for the day. The full moon brightened this atmospheric old town. Looked like all the tourist in town were here. It is a great place to wind down relax and listen to melodious Cubano music.