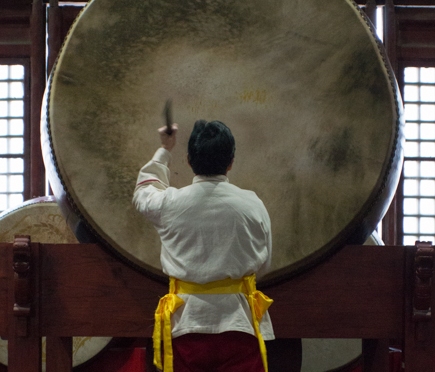 From Sichahai, via the wonderful Yan Dai Byway (Skewed Tabacco Pouch Street, we entered the Gulou Dong Dajie. Here lies one of the symbols of the old city, Drum Tower. An imposing pagoda like structure rose against a blue sky at the end of the busy road.  Inside the compound, several rickshaw drivers offered Hutong tours. At the other end, is the formidable gray-looking Bell Tower. Hutongs surround this ancient towers. The locals gathered in this convenient large cobbled stoned compound.  Some just chatted away with little ones running around. 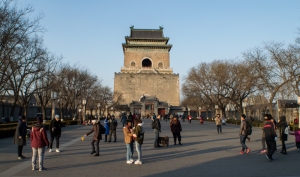 Both these towers are symbols of the old city. They were built around 1272 during the Yuan dynasty and the capital (Beijing) was named Dadu. They were historically used for telling time during the Yuan, Ming and Qing dynasties. They set the tempo and beat of daily life in Beijing. A small collection of colorful rickshaws gathered at the entrance. They gently persuaded us to take their hutong tours. They were not pushy or aggressive. We just turned down their offers.  We wanted to walk through the hutongs at a leisurely pace. 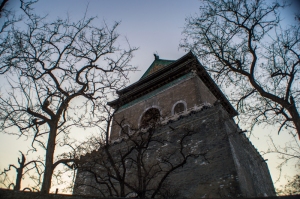 We headed first to the Bell Tower. It is a decent climb up to the top. Albeit the pollution laden air, the views were wonderful. On one end, the towering CBD and nearby, compactly arranged gray roof-tops of the hutongs. This is old Beijing, still preserved in pockets in the heart of modern Beijing. The huge bell, at 57 tonnes, had a rather sad story. The maker tried several times but failed. Eventually, his daughter jumped into the furnace and the finished bell resonated perfectly. We wandered around a park adjacent to the Bell Tower. Adults and kids played badminton and some elderly people played mahjong. We surveyed the area while exercising on some exercise implements. 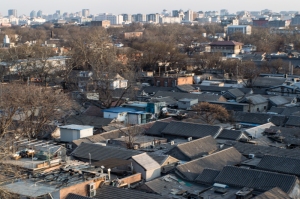 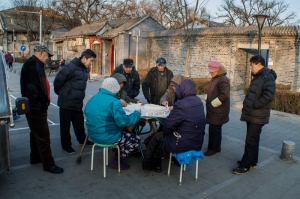 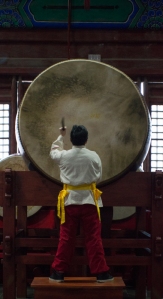 The walk up the steep staircase to the top of Drum Tower was tiring. However, the view from the top was similar to the Bell Tower. Originally, thee were 24 drums but only one had survived. We timed our visit here with the  scheduled drum performance. It was interesting and entertaining. It was getting late as we left these ancient towers. We were ready to hit the hutongs, near the northern lake areas.