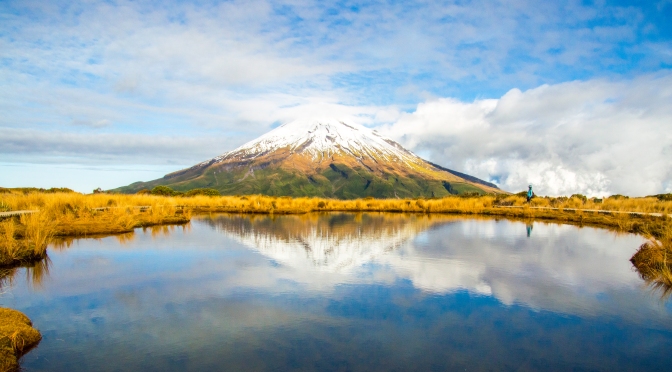 It was mid-July, just after a month long Covid 19 lock down. We arrived late in New Plymouth after taking the long The Forgotten World Highway from Tamaranui to Stratford in wet and cloudy weather. However, today promised to be a fine day. We decided to do the 17km Pouakai Crossing – Mt. Taranaki’s (Mt Egmont) epic 9 hours day walk that circumnavigated the north eastern and western face. Please see my Pouakai Crossing photos

This is a great alternative to the often crowded Tongariro Crossing. Like the central plateau mountains, Mt Taranaki created its own weather – temperatures can drop and rise with adverse wind and rain conditions at any time. Preparedness in any weather is critical. No booking is required, except when huts are required. Please refer to DoC – Pouakai-Crossing

We drove to the Mangorei Road end car park. The dawn sky turned red with streaks of clouds. This is a one-way track. We organised a shuttle with Taranaki Mountain Shuttle. We were picked up promptly at 0730 by Rob and transferred to North Egmont Visitor Centre. This one-way option allowed us to complete the hike at our own pace (the return). Transport is available for both ends (start and finish). Ruapehu and Ngauruhoe mountains, with a blueish hue, in Tongariro National Park were visible from here.

The first part of the track is to Holly Hut. The hike began from the North Egmont Visitor Centre and goes uphill through cool  montane forest – mixed forest with trees covered in epiphytes, moss and lichens. A thick layer of clouds obscured any mountain view. This steep hike continued for about an hour  before emerging onto a razorback ridge with sub-alpine bush and scrub landscape. As the  lower clouds burnt off with the rising sun, some snow covered mountain views emerged. The track continued uphill  with sweeping views of the Taranaki plains, lime green scrub forest, Tasman Sea and the distant central plateau  icy Ruapehu and Ngauruhoe mountains. The morning sun lit up the landscape, warmed our bodies and further revealed more of the mountain. On the left slope was a transmission antenna.

The track skirted along the eastern face towards formidable but magnificent lava columns of the Diffenbach Cliffs. Parts of the lower slopes were covered with snow. Short parts of the track was flooded. We passed the towering cliffs which looked imposing but at the same time striking.   We continued and negotiated some climbing over rocks at the Boomerang Slips. A series of wooden steps eased the crossing. The next major obstacle was past the Boomerang Slip. Due to recent poor weather, a major landslide had occurred.  This prevented the track to continue along this path to Holly Hut. Fortunately, repairs had been carried out and now passable. It was basically a 30cm line across a steep loose rock face slope. Slowly but surely we crossed with fears of any mishaps. There is no time to stop and wonder. There was a bit of relief once we passed this point. Small streams of water fell over the rocks. We reached the Kokowai and Ahukawakawa Track junction at 1100. Finally, the whole symmetrical mountain was visible, including the snow peaked summit (2518 meters). A (near) perfect conical mountain similar to Mt Fuji. Today, there were about six  hikers on the track. With sunshine and cool air, it was a perfect day for this hike. The mountain god was kind with us today!

From hereon, we took the Ahukawakawa Track which descended with views of the Pouakai Range and Ahukawakawa swamps in the valley below. The expansive views of the sea, and north eastern and north western plains were stunning. As we descended, the mixed forest returned and the vegetation became taller.  After an hour of winding down steps and track, we arrived at Holly Hut after crossing the slow flowing Minarapa Stream. Having climbed several mountain tracks, in torrential rain, streams can rise meters within a short period and become violent. This stream is no exception. We stopped at the empty hut for a well earned rest and lunch. The sun shined brightly and the dormant Taranaki conical peak was clear. From the hut, there is a track towards Bell Falls. We skipped this one hour return track to save time, energy and daylight (short days in winter) for the crossing.

With the body refuelled, we retraced out steps over the stream and continued on the Ahukawakawa Track. Within 20 minutes of walking on water saturated wooden planks, we entered the swamps covered with red tussock grasses, sphagnum moss, flax and aquatic plants. This unique micro-climate is home to some endemic plants and animals. The god mountain Taranaki was fully exposed. It was magnificent. A raised wooden viewing platform was the ideal place to stop and take in the stunning views – Taranaki, the 3500 years old alpine wetland – the Ahukawakawa swamps and the Pouakai Range. All in one gentle sweep. A long boardwalk, underwater in places, brought us to a bridge over the clear Stony River. The  30 minutes wetland walk continued towards Pouakai Range. It was scramble to climb up as the path is wet and muddy in places. However, the ascend presented fantastic views of this ancient landscape. It is so quiet.

The track climbed steeply through moss covered mountain ceder (kaikawakawa) and mixed forest, we reached the Pouakai Track junction. Turning right towards Pouakai Hut, the gentle climb reached a 1400 meter high plateau strewn with rocks. The track is over wooden boardwalk. Within 20 minutes, we reached another junction – one leading downhill towards Pouakai Hut and Mangorei track. The other continue downhill on the Pouakai track towards North Egmont Visitor Center. An iconic tarn is also located along this track , within 20 minutes. Continuing on boardwalks in this pleasant landscape led us towards a tarn (alpine lake). Iconic because, it presented a chance to capture a reflection of Taranaki! However, your faith must be even stronger for the pool to be still with no breeze and off course, Taranaki to be exposed. This is a fragile environment and only walk on the boardwalks. It was crowded when we arrived here. We had taken 6 hours to get here. However, this tarn can be accessed via the Mangorei Track ( our trail end), perhaps within 2 hours. Some people looked like they have just arrived here after a shopping spree in the city. Poor attire and footwear can be disastrous should the weather turn for the worse. Furthermore, not many understand the fragile and scared nature of the environment (walking onto the ground and water). One Kiwi couple told me that they are waiting for sunset to capture ‘that Instagram photo’.

We could not linger anymore. We retraced out walk back towards Pouakai Hut. Once we began descending on the eastern slope, Taranaki was no more. The expansive sight of the plains, Mt. Ruapehu and Tasman Sea was still clear. Initially we descended the dark, humid and twisted Kamahi trees covered with moss and lichens. There were hardly any birdsong. The sun could hardly penetrate through the dense canopy. This has been labelled the Goblin Forest.  The track is now only boardwalks. Ground and tree ferns appeared together with a broad leafs, including beech forest, as we descended on the Mangorei Track. Continuous walk on the hard material was tough of the feet. After two hours, we emerged out of the forest and reached the trail end.

The wonderful but demanding Pouakai Crossing had taken 9 hours of hiking through temperate and beech forest, sub-alpine bush, ancient swamps, Goblin Forest, rugged and wild landscape, expansive views and past volcanic formations. All,  in the shadow of the mighty Taranaki.

Legends say that  – Taranaki once lived in the central plateau with male mountains – Tongariro, Ruapheu and Nagurhoe.  A scuffle broke out between Tongariro and Taranaki when the latter began flirting with a female mountain, Pihanga. Taranaki carved the land as he fled with tears – now the Whanganui River and rested in New Plymouth (Ngāmotu). He continued to cry, hence the frequent incidence of rainfall.  He hid his tears, hence the mountain is often obscured in clouds.

Today, Taranaki gifted us with a rare ‘good’ day. We stayed in New Plymouth for five days, we only saw it for one day.